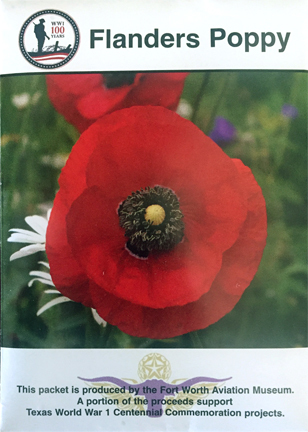 Since 1919 the Flanders Poppy has been known as the "remembrance flower" to honor fallen veterans in WW!. Today they represent the sacrifices of all veterans from all wars and are promoted here in the US by the American Legion. They are also recognized in the the United Kingdom, across Europe, and Australia for the same reasons. The Flanders Poppy was made remarkable from the poem "In Flanders Field" from John McCrae in 1915.

These seed packets contain approximately 6,000 seeds and will cover an area of about 50 square feet. A portion of the proceeds from these packets will go to fund various World War 1 projects here in Texas.

Plant a Poppy - Remember a Vet!